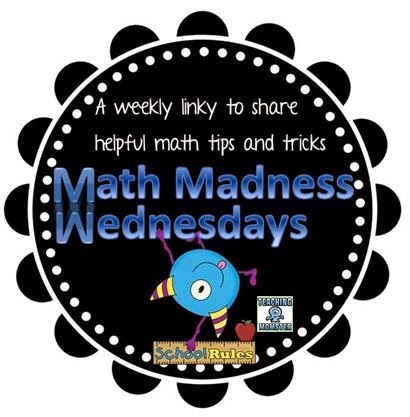 AARRGHHH, matey!  Talk Like a Pirate Day is quickly approaching (it is on September 19th, in case you haven’t heard yet).  What a FUN way to get the kids engaged into learning!  And, since it is on a Friday, you can enjoy it even more.  🙂 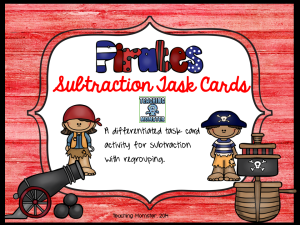 Let the students practice their subtraction skills with these differentiated task cards.  Three different levels are included so you can differentiate for every student or throughout the year.  Recording sheets and answer keys are included!
I have several pirate themed books that I LOVE!  Here are a few if you are looking for some for read alouds:

For a math connection, Pirate Pete’s Talk Like a Pirate is great!  Basically, Pirate Pete is looking for a new pirate, but they have to talk like a pirate.  When he asks candidates what they can do, none of them talk like a pirate.  He tells them what they SHOULD have said (in pirate-speak) instead.  This can make an easy conversion to different ways to say numbers!  For example the “easy” way to say 24 is “24,” but a pirate might say it as “12 + 12” or “6 x 4.”  Or, they could draw a picture, use tally marks, or make ten frames to show the number!
Don’t have the book, but want to do the lesson anyway?  There is a GREAT version read aloud {HERE}.  In fact, even though I have the book, I still might use this version because the pirate talk is MUCH better than my own!  🙂 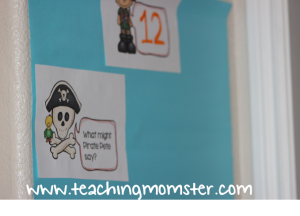 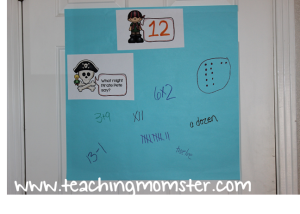 Want to make it even MORE fun!?  How about turning it into a game!?  In my class, we liked to play Musical Math.  I would have chart paper hanging in different spots of the room with a concept or number at the top, along with a pile of markers.  Students made a circle in the room, all facing the same direction.  When the music starts, they walk around in the circle.  When the music stops, the go to the nearest chart paper (I had them only go forward, not backwards, to help avoid “collisions”).  Students would have about a minute to add to the chart paper (add an idea, add another way to get to the given number, add a story problem that has that answer, add a shape that follows the rule, etc.).  They LOVE this way of getting out of their seats and since there is rarely only one person at the chart paper at any given time, they also have a chance to collaborate with others.  And, it allows for easy differentiation because students can answer the question at their level.

With this product, you get the pictures of the pirates with speech bubbles for you to fill in with a number or concept.  It also includes a picture of “Pirate Pete” with a speech bubble asking how he might say the same thing a different way.  Recording sheets are also included!
Want some No-Fuss centers?  Here are two of them that can save you ink!  They are very similar, but one focuses on multiplication facts (true or false) and the other focuses on an important reading skill: Fact or Opinion.  You can use them as a center, file folder game, or simply use the recording sheet as a printable! 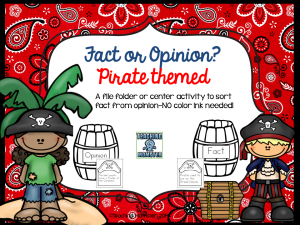 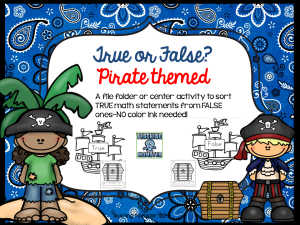 You can get all 4 of my products at Educents for only $4 in my Pirate Bundle! 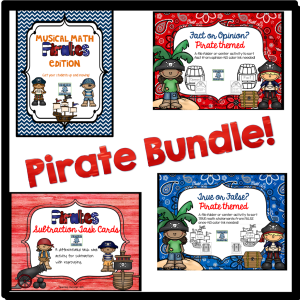 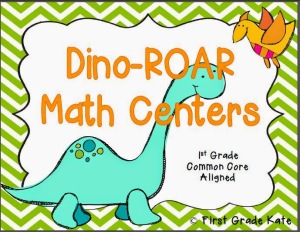 Or, how about Laura Candler’s Math stations?  You can grab them {here} for only $19.99.  This bundle even includes a webinar from one of the math gurus! 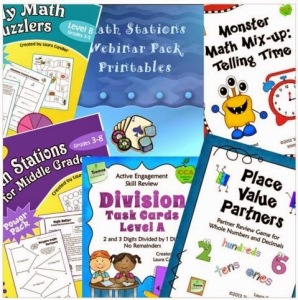 Want some more pirate ideas?  Walk the plank to my Pinterest board {HERE}.  And, check out the other awesome pirate themed products in my link up below.  Ahoy, matey!